Awakening A Little Each Day

We all do our best to get by. Whether we realize it or not, we prioritize trustworthiness in ourselves, other people, animals, and even things such as cars & appliances. At the same time, we know that everything & everyone, including ourselves, changes constantly. We see this change whenever we look in the mirror. We see ourselves age, AND YET, somehow, the one who is aware of this feels somehow timeless.

"We are luminous beings. We are perceivers. We are an awareness.
We are not objects. We have no solidity. We are boundless.
The world of objects and solidity is a way of making our passage on earth convenient. It is only a description that was created to help us.
We or rather our reasons, forget that the description is only a description and thus we entrap the totality of ourselves in a vicious circle from which we rarely emerge in a lifetime.
We are perceivers.
The world that we perceive though is an illusion. It was created by a description that was told to us since the moment we were born." Don Juan

“As I’ve discovered, awakening doesn’t belong to one teaching or tradition, and in any case, once you wake up, you actually awaken out of traditional frameworks. After all, if you’re awakening to your true nature, the one you’ve always already been deep down inside, how could one tradition or approach have a monopoly on it? This precious spiritual nature has always belonged to you, and, like one version of the proverbial prodigal son, you’re merely discovering the diamond that’s been hidden in your pocket all along.
In fact, more and more people appear to be awakening to their inherent spiritual nature, whether or not they’ve been practicing meditation or some other prescribed technique. Perhaps it’s just our technological times, when experiences are shared so much more globally through cell phones, e-mails, websites, and blogs, but awakening seems to have shed the garments of religion and revealed itself for what it is – a universal human experience available to everyone right here and now. Despite what you may have been led to believe, enlightenment is your birthright, your natural state – you merely need to reclaim and learn to embody it.”
Stephan Bodian. “Wake Up Now. A Guide to the Journey of Spiritual Awakening.” McGraw-Hill, 2008. HIGHLY RECOMMENDED

Please play Buffy Sainte-Marie's beautiful song today - September 30, 2021 - our first National Day for Truth & Reconciliation. We have SO MUCH to learn from our wise First Nations sisters and brothers. Thank you CBC Radio for playing this beautiful music!

“Many people have intimations of their true nature in childhood – the sense of a benevolent presence guiding their life, a radiance that shines forth from all things, or a current of love that unites us all. …
But we lose touch with this luminosity as we age … we forget who we really are and succumb to the way others see us..."
Stephan Bodian. “Wake Up Now. A Guide to the Journey of Spiritual Awakening.” McGraw-Hill, 2008.

By adulthood we've more or less forgotten who we truly are, and have passively absorbed the current cultural fad of being frozen in the armor of materialism, meaninglessness & cynicism. Not surprisingly, something in all of us "continues to weep over the barrenness of modern life."

The Way It Is
William Stafford

"There's a thread you follow.
It goes among things that change.
But it doesn't change.
People wonder about what you are pursuing.
You have to explain about the thread.
But it is hard for others to see.
While you hold it you can't get lost.
Tragedies happen; people get hurt
or die; and you suffer and get old.
Nothing you do can stop time's unfolding.
You don't ever let go of the thread."

“The life I chose when I promised my six-year-old self never to forget being a child, never to grow frightened and dishonest like the grownups I saw, nodding politely to each other without affection, and decided to put my true self in a time capsule for later use.” Aurora Levins Morales

“Love is subversive, undermining the propaganda of narrow self-interest. Love emphasizes connection, responsibility and the joy we take in each other. Therefore love (as opposed to unthinking devotion) is a danger to the status quo and we have been taught to find it embarrassing.” Aurora Levins Morales

“Love … is seeing the unity under the imaginary diversity.” Sri Nisargadatta Maharaj

“By religious attitude I am not referring to following a path toward redemption or salvation or even necessarily to being a member of a religious institution. A religious attitude relates to the cultivation of soul – an openness to wonder, awe, fear, and reverence with respect to the ‘other,’ those numinous forces that exist outside our conscious control. These powers have been called at various times fate, destiny, the hand of God, or, to use Robert’s term, slender threads.” Jerry M. Ruhl

“I have learned to trust the slender threads for the big decisions in my life while using my ego to take care of the small details.
Humankind has struggled with the dilemma of how to balance fate versus free will since time began. There have been many rules of thumb for how to achieve such a balance. My personal approach is that the big events in my life follow a slender thread while the details are my business. Nobody but me will balance my checkbook or shave me or keep my house tidy. Those are the appropriate tasks for the ego. The little decisions belong to us, while the great things are like the weather sweeping us along. Yet most modern people spend a majority of their waking hours worrying about larger issues that the ego cannot really control. The small and limited ego is not the proper human faculty for such issues. The ego does not belong in the driver’s seat. In fact, the ego often gets in the way of being attentive to the slender threads. We must learn to humble and quiet our egos so that we may follow the slender threads.
… I feel that the ego is properly used as the organ of awareness, not the organ of decision. … The ego is useful for collecting information about ticket fares and accommodation and things to see and do when you arrive. But the ego does not determine the experience you will have on your trip. People get so preoccupied with trying to control things that are not in the ego’s province that they neglect what is the ego’s business – heightened awareness. The ego should be collecting data and watching. The ego serves as the eyes and ears of God. It gathers the facts, but it does not make the ultimate decisions. The decisions come from the Self, Dr. Jung’s term for a center of intelligence that is not limited to the ego but contains all of the faculties – conscious and unconscious – of the personality. Obviously, this is but a new attempt to describe the old concept of a personal relationship with God.” Robert A. Johnson
Robert A. Johnson, Jerry M. Ruhl. “Balancing Heaven and Earth: A Memoir of Visions, Dreams, and Realizations.” HarperCollins, 1998. HIGHLY RECOMMENDED

“We are made to trust our destination. We are not lost.” Aurora Levins Morales 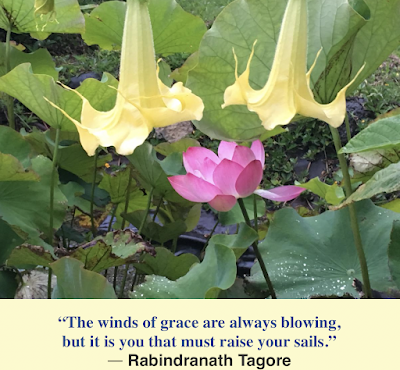