Many today are drowning in a dazzling array of challenges: burn-out from overwork / depression from unemployment; anxiety / boredom; overwhelmed by too many people / desperate loneliness; obesity / hunger; adrift in too much choice from wealth / imprisoned by poverty; etc.
“The Buddha once spoke of what he called the eight worldly winds. Gain & loss, fame & disgrace, praise & blame, and pleasure & pain spin the world, he said, and the world spins after them.
These eight winds blow through everyone’s lives, no matter how much we have meditated or how accomplished we have become. They challenge us endlessly: we instinctively recoil from the discomfort they create yet chase after the ego gratification they promise.
The Buddha suggested that this (our recoiling / chasing reaction) ties us unnecessarily to the vagaries of worldly life. The eight winds come and go ceaselessly; as much as we try to pick and choose among them, it is impossible to have some without the others. While we cannot stop them, with enough foresight we can learn to relate to them differently. Desirable things do not have to beguile the mind, and undesirable ones do not have to bring endless resistance. We can let the winds blow through us instead of letting them buffet us about.” Mark Epstein, “How Meditation Failed Me” Tricycle 2022

MOST of our suffering is "discretionary" - completely unnecessary according to Buddhism! We CAN: learn to gradually accept even the painful challenges that we can't change eg constant change, aging, sickness & death of even our closest loved ones & ourselves. We CAN: find the energy & courage to change the things we can & should. And we CAN: discover our innate wisdom to know the difference between what we can't change & must accept, and what we can & should change.

Obtaining relief from the bulk of our suffering (as described above), demands radical acceptance! http://www.johnlovas.com/2022/06/too-beautiful-to-die.html

We underestimate & overlook the EXTREME efforts SO MANY make in their FUTILE attempts to escape relentless suffering:
• An estimated 703,000 people a year take their life around the world. For every suicide, there are likely 20 other people making a suicide attempt and many more have serious thoughts of suicide.
• Overdose deaths remain a leading cause of injury-related death in the United States. The majority of overdose deaths involve opioids. 91,799 in the USA in 2020. 3,556 in Canada, between January & June of 2022 - approximately 20 deaths per day.
• Addictions:
Psychologists estimate that the prevalence of work addiction in Americans is 10%. Other estimates that range from 15–25% may include people who are committed workers rather than those who have a true addiction to work. Jun 3, 2022
Chronic phone use is a recently developed form of addiction. The American Psychiatric Association does not officially recognize the condition. Still, it is acknowledged as a behavioral addiction by many medical professionals and researchers worldwide. According to several studies, over time, the devoted use of smartphones can alter and negatively impact an individual much like gambling. The devices are carefully designed to be hard to put down. Through its colors, sounds, & vibrations, the technology purposely keeps its users engaged. According to former Google design ethicist Tristan Harris, features like “pull to refresh” were inspired by slot machines & other casino games. Designers & engineers meticulously develop every aspect of the device to create fanatical users.
Approximately 1 percent of the adult population in the United States has a severe gambling problem. The most recent research estimates that 6 to 9 percent of young people and young adults experience problems related to gambling -- a higher rate than among adults.
About 10% of all adults admit to having an addiction to sexual content on the internet. This includes 17% of women. Officially, however, about 200,000 Americans meet the classification of porn addiction. Sep 13, 2022
More than 5% of the population may suffer from food addiction, according to one study. Foods full of fat and sugar can supercharge the brain’s reward system similarly to the way addictive drugs do. They can override the brain’s normal ability to tell an individual to stop eating. When this happens, a person may want to eat more and more.
Hoarding disorder is now a medically recognized mental health disorder and one which can be greatly affected by addiction. The overall prevalence of hoarding disorder is approximately 2.6%, with higher rates for people over 60 years old and people with other psychiatric diagnoses, especially anxiety and depression.
More than 3 billion people play video games globally, including 214 million in the U.S. The World Health Organization reports that up to 3% of people who play video games have a video game addiction.
Some extreme adventurers readily admit to being addicted to their very dangerous sports: "Something larger than you takes over. It’s mysterious and inexplicable. You need to go out there again and again to find it.” Maria Coffey (see below)

Regarding the use of the term "addiction," one psychiatrist who specialized in treating addictions for over 25 years wrote that there's only a quantitative difference between those addicted to substances and the average person's clinging to the momentum of their sleep-walking life - ie most of us resist living a more consciously evolving life. Gerald May. "Addiction and Grace. Love and Spirituality in the Healing of Addictions." HarperCollins, 1988.
Even more pointedly, neuroscientist & professor of developmental psychology Mark Lewis PhD, argues that addiction is not a disease, but results from the motivated repetition of the same thoughts & behaviors until they become habitual. https://healthyhealers.blogspot.com/2015/08/addiction-not-disease.html

"similarly to my alcoholism and addiction, I view depression and anxiety as the inevitable result of a consciousness that doesn't take time to turn inward & listen to what needs acceptance. My sanity, like my sobriety, is a daily reprieve born of effort & diligence, rather than a birthright. And, quite frankly, I wouldn't have it any other way." Josh Korda

Former world champion extreme skier, Kristen Ulmer, teaches her workshop participants “to breathe in their fear and breathe out the possibility of ever getting rid of it.
‘As humans we have these disowned voices. For years I completely disowned fear; it was not going to help me accomplish being the best woman skier in the world. No fear, no fear – it was like having this screaming child in the basement desperate to get out. At some point it’s going to start tearing you apart.
Only when you embrace your fear [AND other parts of your "shadow"] can your fear relax. It’s like a child that needs to be listened to. Once it’s listened to, it calms down.’”
Maria Coffey. “Explorers of the Infinite. The Secret Spiritual Lives of Extreme Athletes – and What They Reveal About Near-Death Experiences, Psychic Communications, and Touching the Beyond.” Jeremy P. Tarcher / Penguin, 2008. FANTASTIC imho

“The purpose of life is not to transcend the body,
but to embody the transcendent.” Dalai Lama 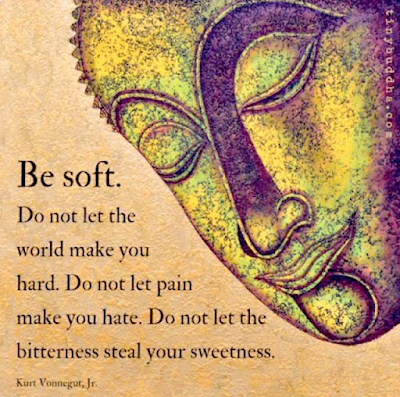